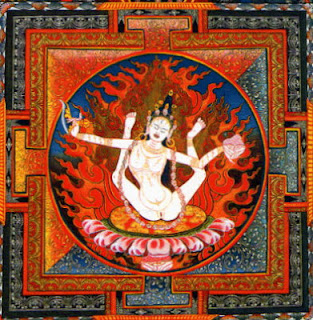 A female follower has to open her legs to greet the Vajra of lama MASTERs.
Once she comes into the inner circle of Lamaism, she becomes Dakini.
It means, she has to satisfy the sexual desires of LAMAs.
In the tantric sexual practice, her gynergy has to be absorbed by LAMAs.
She offers herself as a battery. = She offers her female energy.
If she dares to reject Tantric Practice with them, she will be punished under the 1st rule of Fourteen Root Downfalls (十四根本墮).
If she dares to speak out the esoteric Tantra, she has to go down into the Vajra Hell (金剛地獄) under the 7th rule of Fourteen Root Downfalls. 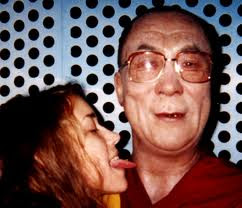 “Among these four, fainting is very strong, but the one that you experience at the time of orgasm is the strongest. That is one of the reasons why the practice of bliss comes into the highest yoga tantra. There is a lot of misunderstanding of the sexual and other imagery associated with the Anuttara yoga tantra. The actual reason for this sexual imagery is precisely because among these four ordinary occasions in which the clear light appears, orgasm is the strongest. Thus this imagery is used in meditation to extend the experience of the arising of clear light and also to clarify it or make it more vivid. This is the point. During the event of orgasm, because the experience of clear light is longer in duration, already you have a greater opportunity to utilize it. ”
(HH the Dalai Lama, Gentle Bridges - Conversations with the Dalai Lama on the Sciences of Mind, p. 81)

“In order to achieve the final aim (enlightenment),
he has to practice the Tantric sex to have the bliss.
In order to keep the bliss,
he is not allowed to ejaculate during the sexual intercourse.
He has to keep his semen and to use it!
If he ejaculates during the Tantric sexual practices,
he has to have the ability to draw all his semen back,
Otherwise, he will violate the brahma-caryā. It is the greatest sin.”
(Q & A between the Dalai Lama and the Chinese Buddhist Delegation, http://www.bskk.com/thread-230852-1-1.html)


You see:
Dalai Lama tells us the final stage of Tibetan Buddhism is highest yoga Tantra.
The highest yoga Tantra is to practice Tantric Sex.
The practitioner (either a monk or a layman) does not break any precept when he uses his penis.
He breaks precepts only when he ejaculates!

Email ThisBlogThis!Share to TwitterShare to FacebookShare to Pinterest
Label: Kritik an Sexualpraktiken